Week in Review: Dark Clouds on the Horizon 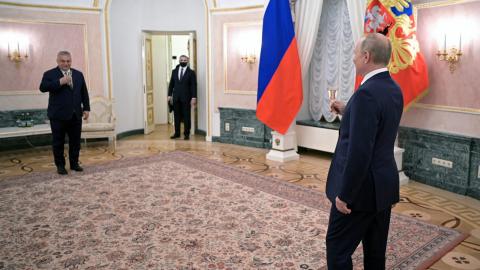 The Russian invasion of Ukraine has been met with all round condemnation in most of Europe and much of the Balkans. Yet there is a clear unease in many countries which depend on Russia for energy supplies and much else, from Italy to countries further east such as Hungary.

Among the countries of Europe and the Balkans, Serbia perhaps finds itself in the most complicated geopolitical predicament. In his opinion piece for Balkan Insight, Vuk Vuksanovic unpacks the complex choices facing the Serbian leadership. In 2014, the Serbian leadership did its best to duck for cover. The same may not be possible this time around.

With Russian troops moving into Ukraine, policymakers and ordinary people across Ukraine, Russia and the rest of Europe are worried by the spectre of large-scale war. Coupled with that are fears of disruption to energy supplies, in particular natural gas, much of which reaches Europe through pipelines traversing Ukraine.

Hungary has been one country to try and reduce its exposure to conflict in Ukraine. As our analysis shows, in September the country signed new, long-term natural gas deals with Gazprom which envisage delivery via Turk...