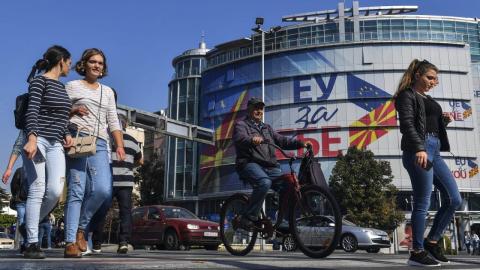 Perceptions of the EU as North Macedonia's biggest ally fell sharply from 43.2 per cent in 2019 to 13.1 per cent in 2021, the compared results of two surveys published by the Skopje-based think tank, Institute for Democracy - Societas Civilis, show.

In the 2021 survey, 17.1 per cent of respondents saw the United States as their main ally followed by 13.1 per cent who saw the EU in this role.

In third place, 11.4 per cent of respondents chose Russia. Serbia came fourth with 8.5 per cent and Turkey came fifth with 6.5 per cent. The highest percentage of respondents, 17.6 per cent, refused to answer or didn't know.

Just 9.5 per cent of respondents to the 2021 survey believed the EU had the biggest influence in the country. In the 2019 survey, that figure was 44.8 per cent - a massive change.

The head of the Institute for Democracy - Societas Civilis, said the analyses show that "the European dream still shines, but the European reality for North Macedonia is becoming a bad dream".

While support for EU membership remained steady, Trosanovski said a deeper look into the results...