Ukrainians Arrive at Europe’s Borders as UNHCR Puts Displaced at Over 100,000 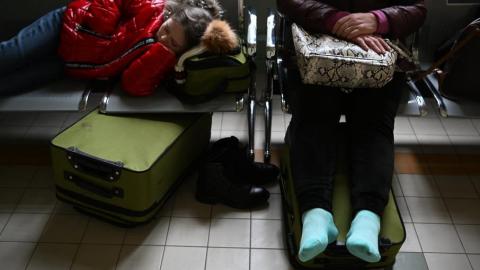 Polish soldiers of the Territorial Defence Force with food at a reception point for refugees from Ukraine established at the train station in Przemysl, southeastern Poland, 25 February 2022. About 29,000 people crossed Poland's border with Ukraine over the past 24 hours, with thousands declaring themselves as war refugees, the National Security Department said. EPA-EFE/Darek Delmanowicz Vehicles line up at the Polish-Ukrainian border in Hruszow village, eastern Poland, 25 February 2022. Poland's Interior Ministry said that the country's Border Guard is prepared for the increased movement of people who will be evacuated towards Poland, as well as for the increased traffic of trucks, after Russia launched a military attack on Ukraine. EPA-EFE/Karina Sao Children are among the refugees coming to Slovakia from Ukraine at the border crossing for pedestrians in the village Veľké Slemence, district Michalovce on Friday 25 February 2022. TASR/Jana Ďurašková Ukrainian refugees arrive at a Moldovan border crossing, with over 4,000 crossings reorted within first 24 hours of Russia's unprovoked attack. The Moldovan government has deployed temporary placement centres near Palanca and Ocnița. "Our borders are open for Ukrainian citizens who need safe transit or stay," said Moldovan President Maia Sandu. Photo: Moldovan Border Police A Ukrainian woman sits on her baggage at the side of the road after crossing the Romanian-Ukrainian border crossing in Siret, Romania, 25 February 2022. According to statements of the Romanian Interior Ministry, 10,624 Ukrainian citizens entered Romania, and 3,336 of them left Romania for other destinations in the last 24 hours. EPA-EFE/CASIAN MITU Still of live stream of refugees fleeing Ukraine crossing into Romania, on 25 February 2022. Photo: YouTube