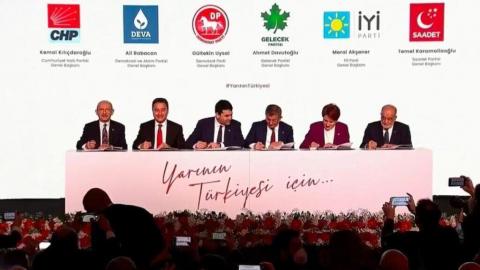 The leaders of six opposition parties have outlined their joint proposal for a system change, putting a signature to a first agreement of the opposition alliance with vows to promote democracy, human rights, rule of law and efficient checks and balances.

A 48-page document that covers 23 articles detailing the strengthened parliamentary system was signed by the leaders of the opposition parties at a massive event held in a hotel in Ankara on Feb. 28. It aims to entirely overhaul the existing executive-parliamentary system, which has been in force since mid-2018 under the rule of President Recep Tayyip Erdoğan.

Kemal Kılıçdaroğlu, the leader of the Republican People's Party (CHP), Ali Babacan of the Democracy and Progress Party (DEVA), Gültekin Uysal of the Democrat Party (DP), Ahmet Davutoğlu of the Future Party (FP), Meral Akşener of the İYİ (Good) Party and Temel Karamollaoğlu of the Felicity Party (SP) came together and signed the document.

It has become the first joint document outlined by the opposition alliance, the Nation Alliance, which was established by the CHP, the DP, the İYİ and the SP in the aftermath of the June 2018 elections. The DEVA and the FP are not yet a formal part of the alliance but both announced they will cooperate with the alliance.

"We vow to make the strengthened parliamentary system real for Turkey," read the introduction of the document on behalf of six leaders.

The document details the strengthened parliamentary system under five chapters: Executive, legislation, justice, accountability and democratic state with rule of law. Each chapter was read by the deputy leaders of the political parties.

The new system suggests a seven-year but one-term tenure for the president which will have...