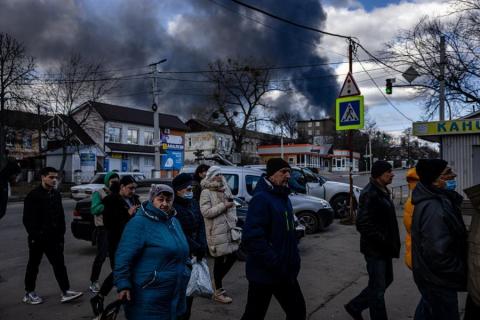 Russian President Vladimir Putin's announcement that his nuclear forces were on alert sparked outcry in the West as the invading troops faced stiff resistance on Feb. 28.

The UN General Assembly will hold a rare emergency session Monday to discuss the conflict, which has claimed dozens of lives and raised fears that it will displace millions of people.
Ukraine has also said it had agreed to send a delegation to meet Russian representatives on the border with Belarus, which would be the two sides' first public contact since war erupted.
Russia invaded on Thursday and quickly announced it had neutralised key Ukrainian military facilities, but fierce fighting has since raged.

Ukraine forces, backed by Western arms, are stymieing the advance of Russian troops, according to the United States, which has led Western condemnation and a campaign of sanctions.
Putin ordered Sunday Russia's nuclear forces onto high alert in response to what he called "unfriendly" steps by the West. Russia has the world's largest arsenal of nuclear weapons and a huge cache of ballistic missiles.
The United States, the world's second largest nuclear power, slammed Putin's order as "totally unacceptable".
Germany said Putin's nuclear order was because his offensive had "halted" and was not going to plan.
Ahead of the planned talks with Russia and as Ukrainian forces defended key cities, Foreign Minister Dmytro Kuleba voiced defiance.
"We will not capitulate, we will not give up a single inch of our territory," Kuleba said.
Ukrainian President Volodymyr Zelensky said he was sceptical about the talks.
"As always: I do not really believe in the outcome of this meeting, but let them try," he said.

On day four of an invasion that...