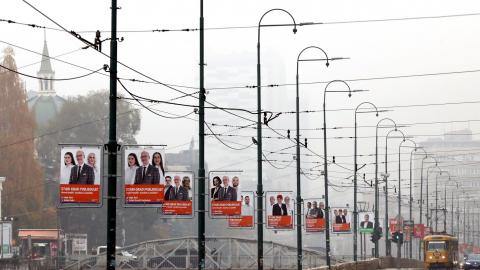 Bosnia and Herzegovina is facing its most serious crisis since the end of the armed conflict in 1995. Bosnian Croat parties are threatening to boycott the country's institutions due to the Bosniak parties' refusal to implement a 2016 Constitutional Court ruling.

A boycott would affect the upcoming budgeting process, ultimately preventing its passage. As a consequence, state employees would not receive salaries, effectively stopping the state from functioning.

Without a budget, the 2022 general elections also cannot be held, pushing Bosnia and Herzegovina ever closer towards dissolution. This follows three years of political deadlock and acute tensions over a Bosnian Serb threat of secession.

A vicious and self-perpetuating spiral is erasing all sense of agency and hope for Bosnian citizens. International community interventions have kept Bosnia alive for 26 years since war ended in 1995, but at a cost.

These interventions have further widened the gaps among the three main nations, as it has become easier for politicians to refuse to compromise, counting on a deus ex machina in the form of the international community headed by the Office of the High Representative, the OHR.

The originally conceived minimalist institutions have been drastically expanded, overburdened by the OHR's unilateral and unpopular impositions. There has been no real progress in rebuilding trust and cooperation. Relations between the three nations are arguably worse today than in 1991. Most Serbs and Croats do not wish to remain in such a state,...