Vučić in Belgrade: "We've changed the image of Serbia; No going back to the past" 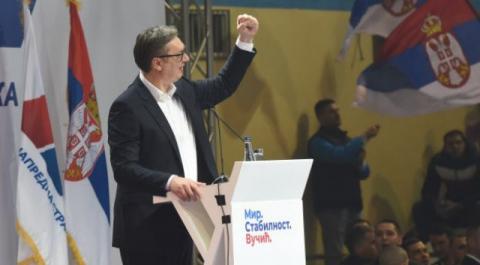 SC Vodovac was fully packed half an hour before the start of the address.
Vui first thanked the citizens who supported his candidacy, and partners from the SPS, the Alliance of Vojvodina Hungarians, numerous associations and hundreds of thousands of people from Serbia and the entire region.
"Thank you very much for your kind words. And thank you for being here today. Of course, it is not so easy for me to speak, like Ivica Dacic, but as he said, I am the one who will bear the responsibility. He is here to attract some votes, and I have to take care of every word. What is important is the fact that we have done a lot together in all previous years", said Vucic.
He adds that a lot has been done, and that the overall image of Serbia has changed, not only in the new kilometers of highways and new hospitals.
"First of all, in terms of the number of factories, since you know that we have witnessed the pluner and looting of our factories and unemployment. We brought 250 new factories to Serbia, and I know that is not enough and we can do better. I am convinced that we have strength and energy, and enough passion for our country to do everything for our country to move forward. To show that we can be more successful than we were in the past", Vucic pointed out.
Vui says that today we are a little ashamed to say that we are the first in terms of economic growth in Europe.
"There are new clinical centers, high-speed railways, metro, these are things that make a difference. These are things that show whether someone accomplished something. When we say that the salary will be higher than 1.000 euros, and the pension more than 500 euros, then we know that we will fulfill that vow. And we would not be able to do that without your energy and...