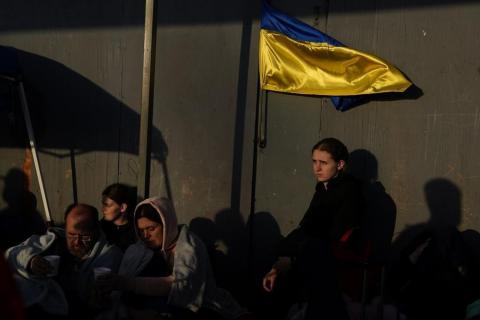 Hundreds of Ukrainian refugees arriving daily have a message for family and friends in Europe: the fastest route to settle in the United States is booking a flight to Mexico.

A loose volunteer coalition, largely from Slavic churches in the western United States, is guiding hundreds of refugees daily from the airport in the Mexican border city of Tijuana to hotels, churches and shelters, where they wait two to four days for U.S officials to admit them on humanitarian parole. In less than two weeks, volunteers worked with U.S. and Mexican officials to build a remarkably efficient and expanding network to provide food, security, transportation, and shelter.

The volunteers, who wear blue and yellow badges to represent the Ukrainian flag but have no group name or leader, started a waiting list on notepads and later switched to a mobile app normally used to track church attendance. Ukrainians are told to report to a U.S. border crossing as their numbers approach, a system that organizers liken to waiting for a restaurant table.

"We feel so lucky, so blessed," said Tatiana Bondarenko, who traveled through Moldova, Romania, Austria and Mexico before arriving Tuesday in San Diego with her husband and children, ages 8, 12, and 15. Her final destination was Sacramento, California, to live with her mother, who she hadn't seen in 15 years.

Another Ukrainian family posed nearby for photos under a U.S. Customs and Border Protection sign at San Diego's San Ysidro port of entry, the busiest crossing between the U.S. and Mexico. Volunteers under a blue canopy offered snacks while refugees waited for family to pick them up or for buses to take them to a nearby church.

At the Tijuana airport, weary travelers who enter Mexico as tourists in Mexico...