Endangered weasel released back into nature 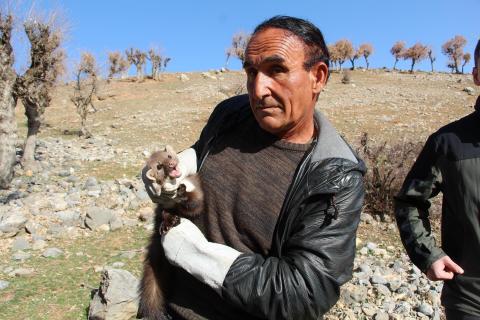 An endangered weasel has been released back into its natural habitat after being treated by locals in Turkey's eastern province of Siirt.

Believed to have been hungry and fallen exhausted due to heavy snowfall in the region a while ago, the weasel was found by Nureddin Yeşilfidan, a villager living in the province's Baykan district.

The villager made the first aid to the weasel at his house, warming him up to save him from freezing temperature and providing regular food for it to heal.

"I got used to him; we even became friends," Yeşilfidan said.

However, since the weasel is a wild species and has to live in nature, this friendship needed a forced farewell.

"When I called Nature Conservation and National Parks' officials, they arrived, and we released it to nature," he added.

Speaking to İhlas News Agency, Gökhan Şeker, one of the engineers of the Siirt Nature Conservation National Parks Branch Directorate, said that the weasel species, which is an endangered animal, is also one of the wild animal species that have been taken under protection.

Şeker also called on the citizens to report the animals they found injured in nature.