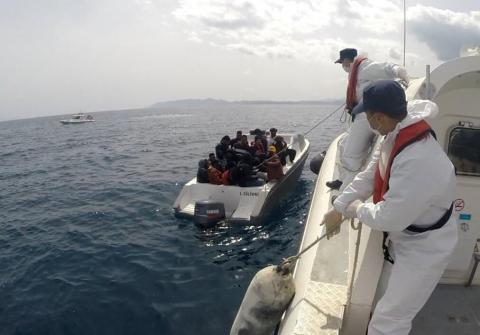 The number of irregular migrants caught in Turkey's seas and migrant movement have increased since the start of the year this year compared to the same period of 2021, data from the country's Coast Guard have shown.

Between Jan. 1 and early April, the Coast Guard has apprehended more than 8,000 irregular migrants, up from 2,860 people a year ago, while the number of irregular migration incidents increased from 99 to 258.

A migrant in January and two people in February perished in the sea during their perilous journey this year, whereas the Coast Guard reported four casualties in January-March of 2021.

On April 4 alone, Turkish authorities apprehended a total of 168 migrants and two suspected human traffickers on a fishing vessel sailing on the route to Italy off the coast of the province of İzmir's Seferihisar district.

Turkey has been a key transit point for irregular migrants who want to cross into Europe to start new lives. Most migrants try to reach the Greek islands in the Aegean Sea, but it changed last year.

In December 2021, the Coast Guard warned that the loss of lives increased in the migration route, which became more dangerous as irregular migrants turned their courses directly to Italy due to the push-back strategy and the pressure policy applied by Greek security forces.

The Coast Guard already reported dozens of such pushback incidents, involving hundreds of irregular migrants in the Aegean Sea in the first months of 2022.

The Coast Guard also said it captured 55 human traffickers between January and early April, up from 10 in the first three months of 2021.

In the whole of 2021, the Coast Guard caught nearly 24,000 irregular migrants in the seas surrounding Turkey in some 850 incidents, up...

Akar urges Greece to ‘keep out of trouble’

Türkiye warns Greece of extending territorial waters to over 6 miles

Sweden says Turkey asking too much over NATO application

Türkiye warns Greece of extending territorial waters to over 6 miles

90% of people in China province infected with Covid: official