Running for Their Lives: How Sport Survived in Besieged Sarajevo 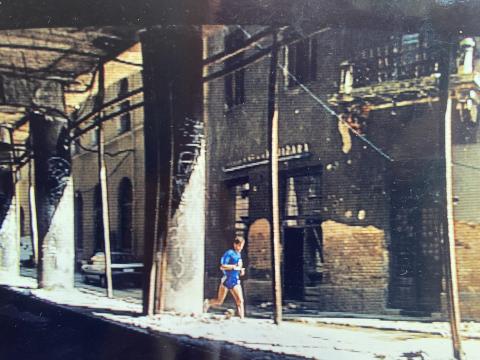 Almir Hodzic, president of the Bosna volleyball club, was also coming back from training the same day.

"After being severely wounded, hit in her neck with a piece of shrapnel, a man planting flowers in front of the presidency building, whose name was Aleksandar, carried Maja in his arms to his parked car and drove her to the Kosevo hospital," he added. The young basketball player did not survive.

At the beginning of the siege of the Bosnian capital, in the same place where Djokic was killed, Ivan Ivandic, a former member of the Yugoslav karate national team and the trainer of the Bosna karate club, witnessed another artillery blast while walking to a training centre at the FIS sports centre.

"I was around 50 metres away from FIS when a shell fell. The detonation threw me upwards. A piece of shrapnel plunged into my boot, but I wasn't hurt," he recalled. Four or five people were severely injured in the blast, he said.

During the 1992-95 siege, sportspeople used to walk to training sessions even though there was a constant risk of being hit by shell fire or a sniper's bullet.

Hodzic said that after the death of Djokic, who he described as a promising player, the women's volleyball club ceased operating for the next 15 years.

Jdo player Vinko Samarlic, volleyball player Bedrudin Kameric and handball player Goran Cengic were also among the thousands of civilians killed during the siege, he added.

Because of food shortages, top athletes ate the same diet as other residents of Sarajevo and suffered from poor nutrition.

Hodzic recalled how the prize for the...