Exercise "Fire Shield 2022" was held; Vučić: "Our army is many times stronger" VIDEO 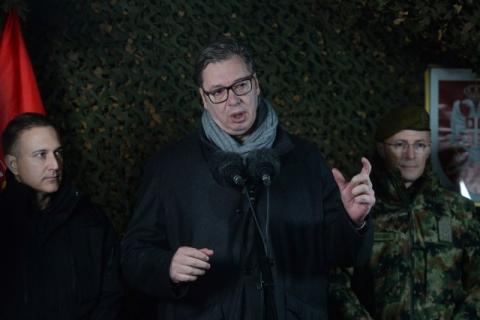 The exercise is being jointly conducted by Army and Air Force and Air Defence units, 72nd Special Operations Brigade and 63rd Parachute
The exercise aims to enhance the capability of the Serbian Armed Forces commands and units to carry out defensive day and night operations on different types of terrain and in different weather conditions. More than a thousand members of the Serbian Armed Forces are participating, using about a hundred combat means and systems. Brigade.
After the exercise, Aleksandar Vui addressed the public.
Vui announced the purchase of French night vision goggles, so the Serbian army will be fully equipped for the night fight.
"It was important to see how much that has changed. Night conditions make a difference between serious armies and those that are not so successful."
"We will also get 'French night vision goggles' for night observation. We showed everything in real conditions. Today we have tens of thousands of rockets. It's good to know that we have clean and accurate dispositions."
"We saw only a part of the power of Pantsir. You could see the gap between camouflage uniforms - old from Yumko and new. It is much harder to see, you can't easily detect it with thermal imaging cameras."
"We will have to strengthen our helicopter units, as well as drones. I have already talked to President Erdogan to buy "Bayraktar" from Turkey.
"Congratulations to all participants, the exercise was successful and risky, because it fired ammunition, it flew over the heads of our soldiers. I could not wait for it to end." "Our army is many times stronger than it has ever been, which is a deterrent to anyone who would endanger peace and stability of the citizens of Serbia."
Asked about strengthening Germany...