57th Tour of Turkey kicks off 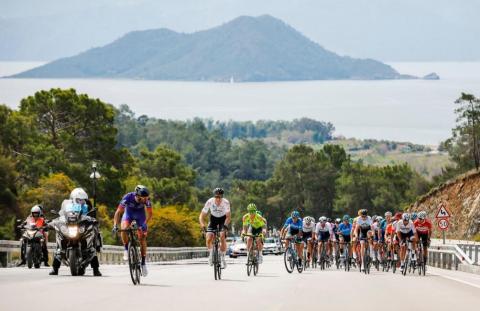 The 57th Tour of Turkey will start on April 10 from the Aegean tourism hub Bodrum and end on April 17 in the country's largest metropolis, Istanbul, with 175 cyclists of 25 teams from 14 countries participating, the head of the Turkish Cycling Federation (TBF) has said.

The Çanakkale 1915 bridge, inaugurated on March 18, will be part of the total route of 1,308 kilometers this year.

"The country will be able to promote the Çanakkale 1915 Bridge to the world with the help of this organization," TBF President Emin Müftüoğlu told Demirören News Agency.

The motto of this year's race is "nature and history."

"Before the race starts, we will be opening a memorial forest in Bodrum," he noted.

The first day's route will be between Bodrum and another Aegean tourism hub, Kuşadası. On April 11, cyclists will try to reach the western province of İzmir's Alaçatı district. On April 12, the finish line will be set in Karşıyaka, another district of İzmir.

On April 13, cyclists will head to Mount Spil in the neighboring province of Manisa.

Cyclists will pass the 1915 bridge on the sixth day of the race. Following the race on April 16 between Çanakkale's Gelibolu district to the northwestern province of Tekirdağ, the race will end on April 17 in Istanbul.

Saying that he passed the 1915 bridge last week in a promotion event, Müftüoğlu added that it was an "enormous feeling one should go and feel there."

The Turkish Cycling Federation has been organizing the Presidential Cycling Tour of Turkey since 1963, and initially, it was known as the "Marmara Tour."

The tour gained international status for the first time in 1965 and was taken under the auspices of Presidential authority in 1966.