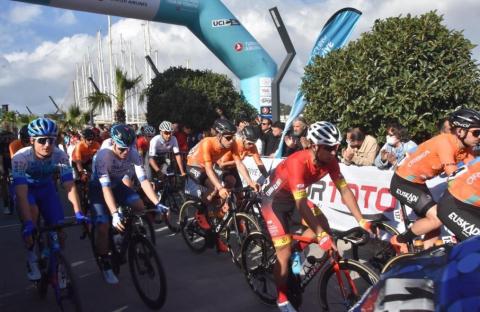 Caleb Ewan of Lotto Sudal sprinted to victory on April 10 in the first stage of the 57th Presidential Tour of Turkey to claim the right to carry the turquoise jersey of the leader.

The Australian rider finished the 207-kilometer stage on the country's Aegean coast between popular resort towns of Bodrum and Kuşadası in 4 hours 38 minutes 5 seconds, ahead of second placed Jasper Philipsen of Alpecin-Fenix and Danny van Poppel of Bora Hansgrohe, who finished third.

The 57th Tour of Turkey, attended by some 175 cyclists from 25 teams will break new grounds, such as becoming the world's first intercontinental cycling race and the first race where prices will also go on sale on NFT (non-fungible token) platforms.

The second stage of 158 kilometers will be run on April 11, with the cyclists trying to reach the western province of İzmir's Alaçatı district.

The most challenging stage, called "the queen lap," will be run on April 13 between İzmir and Mount Spil in the neighboring province of Manisa.

The Çanakkale 1915 bridge, inaugurated on March 18, will be part of the total route of 1,308 kilometers this year.

According to the program, cyclists will pass the bridge connecting the European and the Asian sides in the northwestern province of Çanakkale on April 15. The race will end on April 17 in front of the Atatürk Cultural Center in Istanbul's Beyoğlu district, with cyclists passing the July 15th Martyrs Bridge from the European side to the Anatolian side and coming back.

"The tour will be the world's first intercontinental race with two visits to the European and Asian sides," national broadcaster TRT announced.

Another first of the race is that the prizes that will be given to the winners in different categories...