German cyclist rides in Turkey after traveling to 11 countries 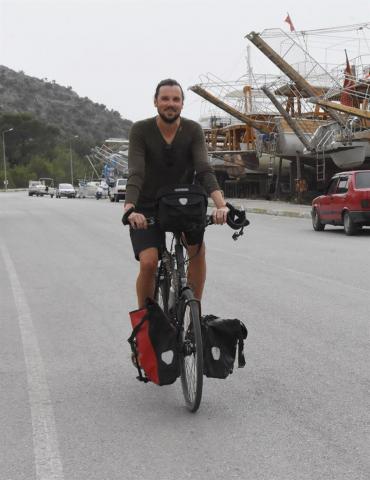 A German engineer who has pedaled to 11 countries in Europe in the last two years has arrived in the southern province of Antalya after entering Turkey via the Greek border in December 2021.

"I will stay in Antalya in April. Then I want to visit [the Central Anatolian province of] Konya and [the historical region of] Cappadocia," Pihan told Demirören News Agency.

His next step will be to pedal across the Black Sea provinces and reach Georgia.

"I will fly back to Germany in August from Tehran after finishing a 7,500-kilometer journey," he added.

When asked how his trip started, he replied, "At first, I did not organize the route. It was just a holiday idea when I started cycling from Leipzig in March 2020."

He first visited Switzerland and then Austria, Italy and Slovenia. He was in Croatia when he faced the coronavirus pandemic measures, curfews and lockdowns, so he returned home.

"It was June 2021 when I rode my bike again and started my trip from Slovenia," Pihan said.

"Turkey is an incredible country with its nature, history, and above all, its helpful citizens," Pihan noted.

Stating he had never witnessed a problem in Turkey since he arrived, Pihan said he would be back in Turkey in the future once again, but not as a cyclist, as a tourist.

"When I get back to Germany, I will recommend all my friends to have a vacation in Turkey," he said.