MHP leader urges nation to be patient over economic difficulties 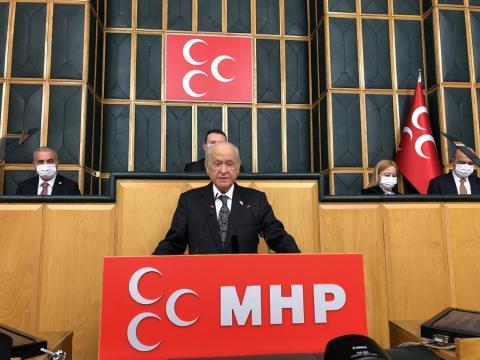 Turkey will be able to overcome economic difficulties, Nationalist Movement Party (MHP) leader Devlet Bahçeli said, urging people to be patient as the country had previously faced such problems in the past.

"If there is an economic problem, we will overcome it together with a unity of faith. If anyone is suffering, we will raise the social and economic level they deserve when the day comes with the help of solidarity of the state and the nation," Bahçeli said on April 12, addressing his party's lawmakers at the parliament.

Defending that the nation should know patiently that the future will be good, the MHP leader said: "The issue is not a matter of eating less or more. If you do not have today, there will be tomorrow. If today is missing, it will be completed tomorrow."

Price increases, hikes and the cost of living are all temporary, Bahçeli said, noting that Turkey had witnessed such difficulties in the past. "It is forbidden for a Muslim to be pessimistic," Bahçeli stated.

The main opposition Republican People's Party (CHP) cooperates with the İYİ (Good) Party, the Saadet (Felicity) Party and the Democrat Party (DP) under the Nation Alliance, which was formed before June 2018 general elections.

Turkey’s concerns about PKK are not legitimate