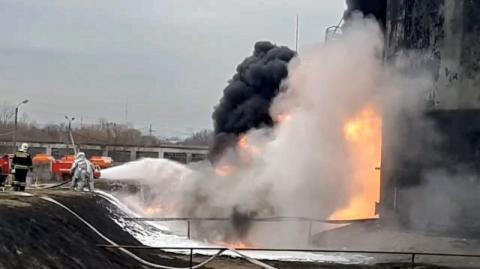 Belarusian border guards shot down a drone on the border with Lithuania, which was flying towards the territory of Belarus.
This was announced on Thursday by the State Border Committee of Belarus, as TASS reported.
"In order to prevent the violation of the airspace and suppress illegal activities, the border guards opened fire on the air target. As a result, the quadcopter was shot down," the Belarusian agency said on a Telegram.

Today, Minister of Foreign Affairs of Lithuania Gabrielius Landsbergis and Minister of Finance Gintarė Skaistė asked the G7 member countries to urgently terminate the membership of Russia and Belarus in the International Monetary Fund and the World Bank, the press service of the Lithuanian Ministry of Foreign Affairs announced.
The ministers stated that the abolition of membership in Russia and Belarus will deprive them of the opportunity to use special rights to loans in the International Monetary Fund, reports Sputnik.
They emphasized that, although the World Bank has limited operations in Russia and Belarus since the start of the special military operation in Ukraine, it is necessary to take even stricter sanctions against these countries.

Missile strike in Chernigov Russia: Residents of two villages in the Belgorod region have been evacuated