"If they join NATO, we will have more enemies"; "Stop sponsoring Russian war machine" 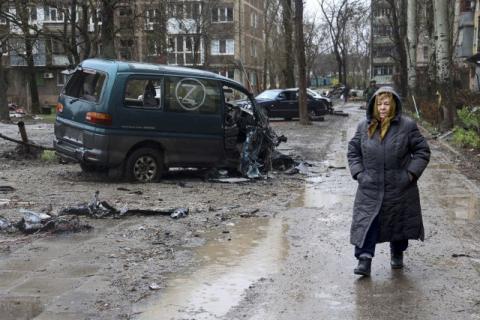 Russia said the main warship of its Black Sea Fleet, the missile warship 'Moscow', was severely damaged and that its crew was evacuated after an explosion that Ukraine claims was the result of a missile strike.
Russia is imposing reciprocal sanctions against 398 deputies of the House of Representatives of the U.S. Congress and 87 Canadian senators, the Interfax agency reported, quoting the Russian Ministry of Foreign Affairs.
A senior U.S. State Department official said on Wednesday that it is likely that the United States will eventually determine that genocide was committed in Ukraine.
The presidents of Poland, Lithuania, Latvia and Estonia arrived in Ukraine yesterday for talks with their Ukrainian counterpart Volodymyr Zelensky.
"Poland and the Baltic states are true friends of Ukraine and are always the first in supporting our state", Volodymyr Zelensky said.
Ukrainian President Volodymyr Zelenskyy noted the leadership of Poland, Lithuania, Latvia and Estonia in the comprehensive support for Ukraine in the face of armed aggression by the Russian Federation. The President of Ukraine stated this to the media following the talks with the Presidents of the four countries in Kyiv.

President @ZelenskyyUa noted the leadership of 🇵🇱,🇱🇹, 🇱🇻 and 🇪🇪 in the comprehensive support for 🇺🇦 in the face of armed aggression by the 🇷🇺. The President of 🇺🇦 stated this to the media following the talks with the Presidents of the 4 countries in Kyiv👇https://t.co/vjgV5DcJf1

Russia's Investigative Committee has announced that it is opening criminal cases due to...