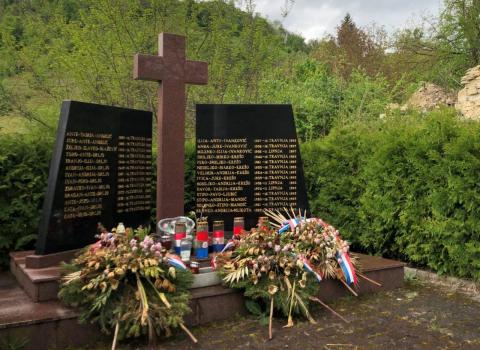 Commemorations will be held on Saturday to mark the anniversaries of wartime killings on April 16, 1993 in the villages of Ahmici, near Vitez, and Trusina, near Konjic.

Atif Ahmic of the 16th of April war victims' association said that very few perpetrators have been brought to justice for the murders of 116 civilians by Croatian Defence Council fighters in Ahmici, and the bodies of 19 of the victims have yet to be found.

"It will never be over in Ahmici until the last remains of the missing persons from this area have been found. It's sad. Our institutions have failed, while the perpetrators of the crime know where they killed and buried those people, but no one is revealing anything," Ahmic said.

At this year's comemoration, two columns of people, one departing from Vitez and the other from Zenica, will move towards the central monument in Ahmici, where they will lay flowers.

The International Criminal Tribunal for the Former Yugoslavia in The Hague sentenced Croatian Defence Council, HVO commander Dario Kordic to 25 years in prison for crimes in central Bosnia, including the killings in Ahmici.

"In only a few hours on April 16, 1993, around 116 local residents of Ahmici hamlet in central Bosnia were killed, including women and children, while around 24 persons were wounded; 169 houses and two mosques were demolished. The victims were Muslim civilians," the tribunal said in its verdict.

"Based on evidence presented to the Trial Chamber in this case, the Chamber finds that this was not a combat operation. It was about the well-planned and well-organised murder of civilians,"...