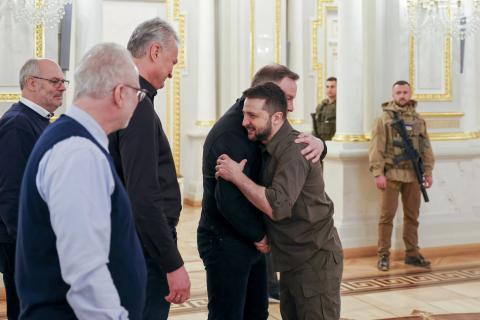 Polish President Andrzej Duda, together with his counterparts from the Baltic states, Gitanas Nauseda of Lithuania, Egils Levits of Latvia and Alar Karis of Estonia, visited Kyiv on Wednesday.

The visit underscored the fact that Poland and the Baltics have been at the forefront of Western support for Ukraine over the past two months, which was also reflected by the embrace that Ukrainian President Volodymyr Zelensky gave Duda.

Duda said the purpose of the trip was "to show support o President Zelensky and the defenders of Ukraine at this key moment" and all the visiting leaders repeated their call for tougher sanctions on Russia. They also took a trip to Borodianka, a settlement near Bucha on the outskirts of Kyiv, which was devastated by the Russian army.

However, German President Frank-Walter Steinmeier, who had been invited by Duda to join the trip to Kyiv, said his presence "wasn't wanted" by the Ukrainian leadership. Kyiv has criticised Steinmeier's role in nurturing German links with Russia.

While in Warsaw on Tuesday, however, Steinmeier insisted that he backs the recent shift in German policy on Russia.

"There can be no return to normal relations with Russia," he said. "The whole world has been witnessing the crimes committed by Russia in Ukraine. Those who are responsible for this must be punished. This barbarism must end."