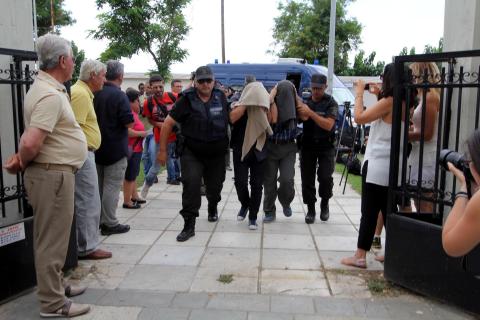 Greece has sent eight FETÖ members who fled Turkey after the failed coup attempt on July 15, 2016, to Belgium, Germany and Canada, a Greek daily has reported.

The FETÖ members, then soldiers in the Turkish military, landed in Greece's Alexandroupolis (Dedeağaç), near the common border, via a helicopter on July 16, 2016.

Greece rejected the extradition of FETÖ members to Turkey and accepted their asylum applications.

Greece engaged in talks with officials from third counties regarding the FETÖ members. After securing permissions, Athens sent them to Belgium, Germany and Canada in two secret operations: One was carried out last summer and the second in the fall of 2021.

Greek security officials took "a deep sigh of relief" after the FETÖ members were transferred to other countries, according to the daily.

Christos Mylonopoulos, FETÖ members' lawyer, confirmed that they were not in Greece anymore.

Shortly after their arrival, the FETÖ members, through their lawyers, relayed their request to settle in Europe and leave Greece, but their demand was rejected as Greek courts did not rule on the cases at the time.

Their trial process was completed and they were granted asylum, which eventually paved the way for FETÖ members to be transferred to third countries.

For some five years, the fugitive ex-soldiers lived in the houses on the premises of the Athens Olympic Complex, then the facilities belonging to the Greek police force and military near Athens.

Greece deployed some 100 police officers to protect them while they stayed in a house...