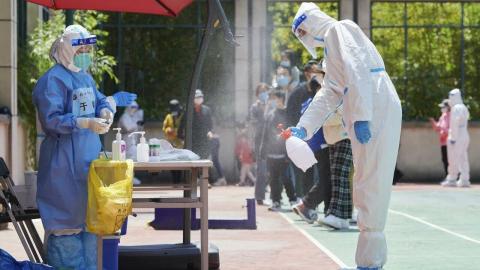 China said Monday that just three people have died from Covid-19 in Shanghai since a gruelling lockdown began last month, despite recording hundreds of thousands of cases of the fast-spreading Omicron variant in the eastern megacity.

Authorities said the first deaths from China's biggest outbreak since the virus wave in Wuhan over two years ago were three elderly people aged 89 to 91, all of whom had underlying health issues.

Beijing insists that its zero-Covid policy of hard lockdowns, mass testing and lengthy quarantines has curbed fatalities and avoided the public health crises that have engulfed much of the rest of the world.

But some have cast doubt on official figures in a nation with low vaccination rates among its vast elderly population. Hong Kong, in comparison, has attributed nearly 9,000 deaths to Covid-19 since Omicron first surged there in January.

Unverified social media posts have also claimed unreported deaths -- typically before being scrubbed from the internet.

The three reported victims "deteriorated into severe cases after going into hospital", according to an official Shanghai government account. The city's health commissioner on Sunday noted that 62 percent of residents aged over 60 had two vaccine doses, while only 38 percent in the demographic had three.

The eastern business hub has groaned under a patchwork of restrictions since March, with many of the city's 25 million residents confined to their homes as daily caseloads topped 25,000 -- a modest figure by global standards but virtually unheard of in China.

Many inhabitants have chafed under the curbs, flooding social media with complaints of food shortages, spartan quarantine conditions and heavy-handed enforcement, and circulating...