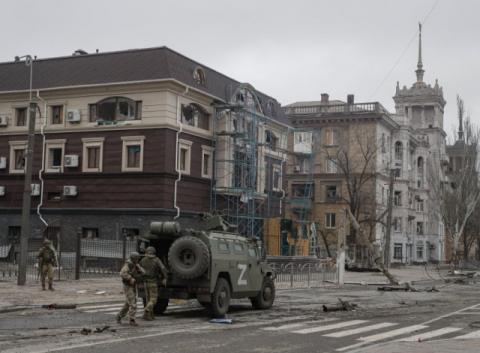 Russia's offensive in Donbas has begun, world leaders are meeting in an emergency meeting, Putin has rewarded the Bucha executioners. Here are the highlights of events in Ukraine over the past 24 hours:

Russia's offensive in Donbas has started

Ukrainian President Volodymyr Zelenskyy has announced that the Russian army has launched a large-scale offensive in the eastern Donbas region. "Today we can confirm that the Russian troops have started the battle for Donbas, which they have been preparing for a long time. A large part of the Russian army is already concentrated in this offensive," the president said in an emergency address.

French President Emmanuel Macron and US President Joe Biden will meet with other heads of state over the new offensive by Russian troops in Donbas. The meeting is scheduled for Tuesday. The leaders of France, Germany, Britain, Canada, Italy, Poland and Romania will also take part in the meeting. It will also be attended by NATO Secretary-General Jens Stoltenberg, European Commission President Ursula von der Leyen and European Council President Charles Michel.

Russia claims to have struck an arms depot with foreign weapons

The Russian army has announced that it has destroyed a large foreign weapons depot near Lviv. The weapon "had just been delivered to Ukraine". The warehouse is one of 16 Ukrainian military sites Russia said it destroyed on Monday. Russian planes struck a logistics center containing "large consignments of foreign weapons delivered to Ukraine over the past six days from the United States and European countries" and "destroyed" them, said...