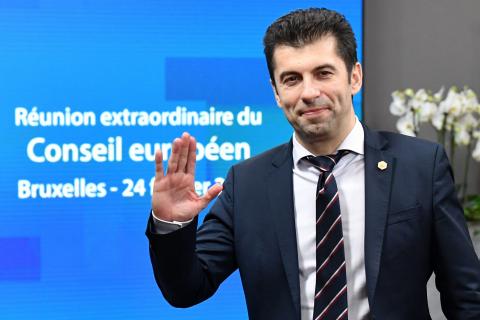 Accusations of betrayal over North Macedonia

Out of the four parties in government, the Bulgarian Socialist Party, BSP, stands out for its advocacy of strong state interference and pro-Russia leanings; There's Such People and We Continue the Change, on the other hand, are both relatively new on the political scene and are united by little other than a desire to break with the legacy of former Prime Minister Boyko Borissov, whose once-dominant GERB party is now in opposition.

There's Such People, which emerged from a wave of anti-establishment protests in 2020 and is led by popular singer and talkshow host Slavi Trifonov, was reluctant to share power after coming second and then first in two parliamentary elections in April and July last year.

Slipping to fifth in the November re-run, the party opted to join forces under Petkov. But Trifonov is doing little to hide his dissatisfaction.

On April 6, Trifonov took to Twitter to accuse Petkov of sidestepping the ministry of foreign affairs, a portfolio held by There's Such People, to set up the start of EU accession negotiations with North Macedonia "by the end of June."

Trifonov said the coalition had agreed that Bulgaria's veto would remain until Skopje implements a 2017 treaty on solving historical disputes between the two countries and recognising a Bulgarian minority. Petkov, he said, is pushing ahead without consulting the foreign ministry, his own coalition partners, "let alone the national assembly."

There's Such People and Petkov's We Continue the Change are also at odds over who gets to govern the Bulgarian National Bank. There's Such People is alone in the coalition in opposing the appointment of Andrei Gyurov, but its own candidate, Lyubomir Karimanski, was voted...