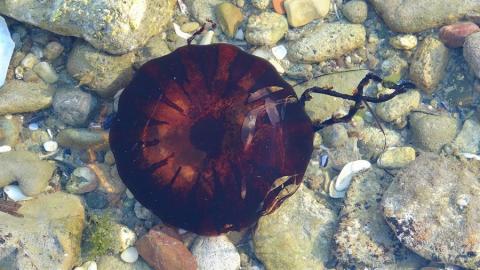 A poisonous species of jellyfish, commonly called compass jellyfish, has been infesting the Çanakkale Strait and spearing into the Marmara Sea, an expert has said, warning people to keep away from them.

The species, known by the scientific name Chrysaora hysoscella, have been migrating from its natural habitats in the Mediterranean Sea and the Aegean Sea up to the north toward the Marmara Sea.

According to scientists, pollution and the rise of 2 degrees Celsius in seawater temperatures in the Marmara Sea are the reasons behind the jellyfish migration.

The compass jellyfish are red, brown and yellow in color, and their tentacles could be 1.5 meters in length.

People should never touch the compass jellyfish, whether they are dead or alive, said Professor Muhammet Türkoğlu from the Marine Sciences and Technologies Department's Aquaculture Faculty at Çanakkale Onsekiz Mart University.

He warned people to stay away and not to touch the compass jellyfish.
"Their tentacles are full of sticky capsules, which may cause rash and itching. The affected area needs to be rinsed with vinegar; never pour fresh water on the skin," Türkoğlu advised.

Other experts suggest that centipedes, which feed on jellyfish, may help with efforts to get rid of this particular poisonous species.

Meanwhile, in the past three months, 33 dead dolphins washed ashore on the beaches...