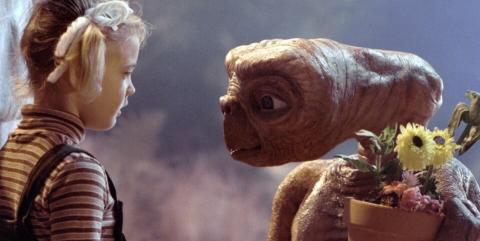 Classic film lovers know the importance of a grand entrance and the folks at Turner Classic Movies are pulling out all the stops for the return of the TCM Classic Film Festival this week in Hollywood.

After two years of virtual editions because of the pandemic, the festival kicks off on April 21 with the help of Steven Spielberg, who will be on hand to celebrate the 40th anniversary of "E.T. The Extra-Terrestrial." He and stars Drew Barrymore, Henry Thomas, Dee Wallace and Robert MacNaughton will gather at the TCL Chinese Theater for a discussion with TCM host Ben Mankiewicz before the new IMAX restoration of the 1982 film screens.

It's the first time Spielberg will be at the festival. He'll also make an appearance to introduce a 4K restoration of the George Stevens' film "Giant," starring Elizabeth Taylor, Rock Hudson and James Dean.

"E.T." isn't the only 40-year reunion on the slate. Kevin Bacon, Tim Daly, Steve Guttenberg and Paul Reiser are reuniting for a discussion and screening of Barry Levinson's "Diner." And Aileen Quinn is joining Alicia Malone to talk about playing the lead in John Huston's "Annie."

The festival will celebrate talent like 85-year-old Bruce Dern, Piper Laurie, the now 90-year-old star of "Carrie," "The Hustler," "Twin Peaks" and "Children of a Lesser God" and Floyd Norman, the 86-year-old animator who has had a hand in everything from "Sleeping Beauty" and "The Jungle Book" to "Toy Story 2." Cast members of "Cooley High" and "A League of Their Own" will be on hand to discuss their films and Lily Tomlin will also cement her Hollywood legacy with a hand and footprint ceremony outside of the TCL Chinese Theater.

"It's a proverbial embarrassment of riches," said Pola Changnon, TCM's general manager. "Having...