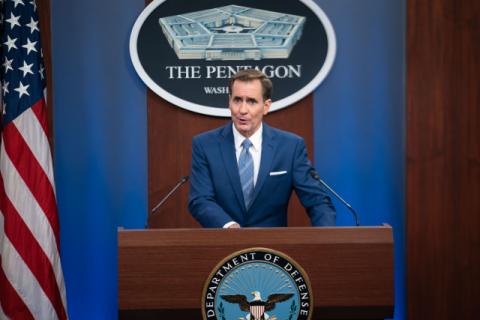 Ukraine has received fighter jets and spare parts to strengthen its air force, Pentagon spokesman John Kirby said, without specifying the number of planes and the countries that provided them, AFP reported.

"They have more fighters today than they did two weeks ago," Kirby told a news briefing yesterday. "Without going into details about what other countries are supplying, I would say that they have received additional aircraft and spare parts to increase their air fleet," he added.

The spokesman did not specify what kind of the planes were delivered but hinted that they were Russian-made. Poland and/or Slovakia are believed to have sent fighter jets to Ukraine.

Other countries that have experience with this type of aircraft have been able to help them have more functioning machines, Kirby said. He noted that the United States, which does not want to be a belligerent in the conflict, has made it easier to send spare parts to Ukrainian territory, but has not sent planes there.

The Ukrainian army has been demanding to receive fighter jets for weeks. Kyiv has asked its Western partners for MiG-29 fighters, which the Ukrainian military already knows how to fly, but which have a handful of Eastern European countries. A possible transfer of such Russian planes from Poland was discussed in early March, but the United States was opposed, fearing that Russia might consider it too direct NATO involvement in the conflict, AFP reported.

The Prime Minister of Canada Justin Trudeau announced on Tuesday that Ottawa will send more heavy artillery to Ukraine at the request of President Volodymyr Zelensky, DPA reported.

Trudeau said he had been in close...