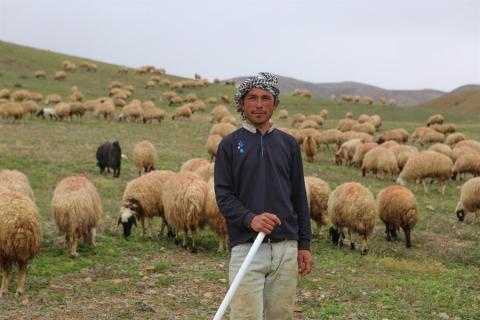 A 25-year-old Afghan citizen has started working as a shepherd in the eastern province of Tunceli to raise enough bride price to marry his beloved he left behind in his home country.

"I will save money and marry the woman I love until the end of summer in Afghanistan," Abdullah Muhammedi told Demirören News Agency on April 20.

To raise the money, Muhammedi came to Turkey by crossing Iran on foot and started working as a shepherd in Tunceli's Pertek district.

He takes 500 sheep to grass in the early mornings and milk them in the afternoons, earning some 11,000 liras ($750) monthly on an average.

"There is war, but no job, no order and no rules in my country. So I came to Turkey," he said.

Heva Üzeli, the 75-year-old owner of the sheep, is happy to employ the Afghan. "We asked him if he was single. He told us his story. Then he began working for us," Üzeli said. "The poor-fellow… He cannot see his beloved, family or country."

Saudi Arabia says seeks to use own uranium for nuclear project

It is right time for retailers to freeze prices: Minister

Circular on violence against women updated