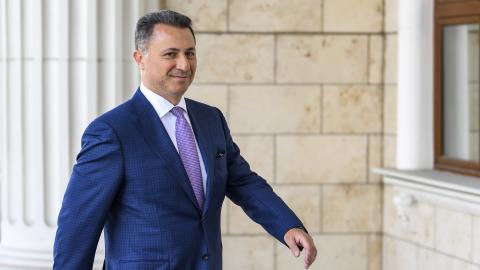 Nikola Gruevski, who was tried in absentia, was found guilty at Skopje Criminal Court on Thursday of unlawfully acquiring over 1.3 million euros from his former ruling VMRO DPMNE party, and of instigating a money-laundering scheme to cover his tracks and buy property with the proceeds.

"For this plan, Gruevski needed money, so he decided to take the money from donations from the party," presiding judge Ilija Trpkov explained.

Gruevski was tried alongside five of his associates. His cousin, the former head of the Secret Police, Saso Mijalkov, was sentenced to one year and three months in jail for aiding the money-laundering scheme. He had pleaded not guilty.

Prominent businessman Orce Kamcev was sent to one year in jail for money-laundering.

Gruevski's best man at his wedding, Risto Novacevski, and businessman Nenad Josifovic each got two-year suspended jail terms for money-laundering, after admitting guilt during the trial.

Kamcev's mother, Ratka Kamceva, who was also charged with money-laundering received no sentence as the court acknowledged that the charges against her had passed the statute of limitations.

This was a first-instance verdict, against which the defendants have the right to appeal.

The verdict said Gruevski used money drawn from donations made to the then ruling VMRO DPMNE party, which he obtained between 2006 and 2012, while serving as prime minister. He then used it to buy attractive sites in Skopje and in other places using an offshore company registered in Belize.

Judge Trpkov explained the scheme that Gruevski used to launder the money.

"Gruevski's money from Macedonia was transferred to Belize and through Stopanska Banka Bitola, it was then returned to Macedonia. Then, as Kamcev...

Invasive lionfish added to menus in Turkey for consumption