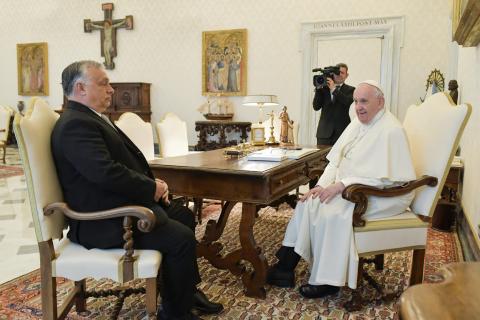 So far, Ziobro has opposed any compromise with Brussels, but the new scenario discussed this week is that his party would submit amendments to a presidential draft law to dismantle the Chamber, which PiS would later accept.

That probably means having an even weaker version of the law than the one put on the table by President Andrzej Duda, but it would allow the Commission to give the green light for unblocking the badly-needed funds.

Despite this deal, however, the Polish governing coalition (made up of PiS and Ziobro's United Poland) remains very fragile, so much so that talks of early general elections - initially scheduled for 2023 - have made the headlines again this week.

Following a meeting with PiS leader Jaroslaw Kaczynski and Prime Minister Mateusz Morawiecki this week, Donald Tusk, the leader of the biggest opposition force Civic Platform - known for his sharp political instinct - said it looked as if Kaczynski was preparing for an early vote, potentially this summer.

Opinion polls still put PiS in the lead, but the margins are small and support for the ruling party risks being eroded fast in the context of accelerating inflation and energy prices.

Meanwhile, a new report by US intelligence analysis company Recorded Future found that it was Russia, rather than Belarus as initially thought, that was behind a massive leak from the personal emails of Polish minister Michal Dworczyk last year.

Throughout last year, two Telegram channels, one in Polish and one in Russian, published periodically the content of emails from Dworczyk's personal account, which the minister was using for professional communication, including with Prime Minister Mateusz Morawiecki.

Dworczyk, whose function is to head the prime...