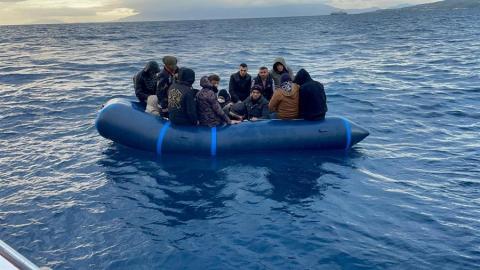 More than 38,000 migrant smugglers have been apprehended and over 9,000 suspects have been arrested in Turkey in the past six years, according to the Presidency of Migration Management.

From Jan. 1 to April 19 this year, security forces have captured 2,545 migrant smugglers, which points to a 53 percent increase from the same period in 2021, the authority said in a statement.

The authority recalled that the punishment for migrant smuggling increased with changes made in laws in 2019 to imprisonment of between three to eight years. Moreover, the migrant smuggling was added to the list of catalog crimes. For each irregular migrant smuggled, perpetrators are fined 2,500 Turkish Liras.

Meanwhile, the Turkish Coast Guard have rescued 31 irregular migrants off the coast of Kuşadası in the Aegean Sea, who were pushed back to Turkish waters by Greek forces.

The Coast Guard said in a statement on April 20 that it recovered the body of one migrant, but four others were still missing.

Migrants told Turkish officials that their dinghies, carrying a total 36 people, sank near the Greek island of Samos. Greek officials proceeded to rescue them but then put them into two boats and pushed them back to Turkish waters. Five of them later went missing. The Turkish Guard...