A Viking epic to conquer them all in ‘The Northman’ 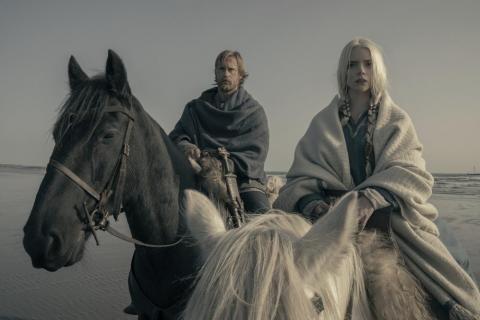 Alexander Skarsgard has been dreaming about Vikings for as long as he can remember. Some of his earliest memories are from Oland, a Swedish island on the Baltic Sea, where his great-grandfather built a home many years ago. His grandfather would regale him with tales of Viking history while walking among the massive runestones.

Skarsgard isn't entirely sure that his grandfather's story about a Viking ancestor named Skar who had a farm on the island a thousand years ago is completely true. But it was the kind of thing that was very exciting to him as a young boy. And it was where the seeds were planted for his latest film, "The Northman," about a self-exiled prince at the dawn of the 10th century. It opens in theaters today.

The Viking dream laid dormant for some time, though. Then around 2017, Skarsgard found himself at a lunch meeting with Robert Eggers, a promising filmmaker who had just burst onto the scene with "The Witch," an eerily realistic depiction of 17th century New England that helped introduce the world to Anya Taylor-Joy. It was one of those "general meetings" that Eggers dreads.

"You usually just sit down with people and talk about nothing and it's usually very awkward," Eggers said.

But it turns out they did have something to talk about. Eggers had recently returned from a trip to Iceland inspired by the grandeur and brutality of the landscapes and armed with classic sagas. By the time they got the check, they'd agreed to make a Viking movie.

"A Viking would definitely say it was fated," Skarsgard said with a smile.

It would send them on their own ambitious quest to create the most historically accurate depiction of Vikings ever.

"In the history of cinema, aside from one tiny Icelandic movie in the...