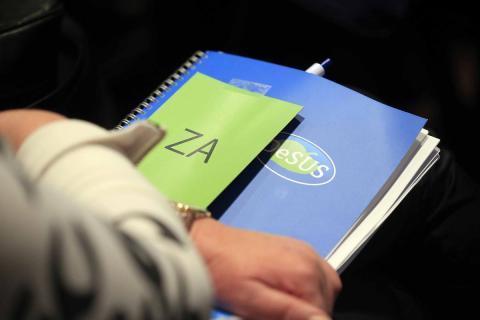 Ljubljana – Slovenian voters will head to the polls on Sunday in an election that analysts say will determine whether Slovenia continues on the conservative path paved by the Janez Janša government over the last two years, or takes a more leftist turn under newcomer Robert Golob and parties that are currently in opposition. Polls show everything is still open.

The most recent polls put the incumbent Janša and Golob, a former energy exec who entered politics just months ago, neck-and-neck, though most polls put Golob a few percentage points ahead with a bigger potential upside from voters who remain undecided.

A separate poll by Valicon, conducted on a much larger sample and providing ranges rather than firm figures, has Golob ahead slightly at 21-28%, and Janša at 20.22%, with more room for tactical votes.

In the second tier the Social Democrats (SD), Left and New Slovenia (NSi) are projected to easily make it to parliament, though the NSi was hit by a late scandal involving Agriculture Minister Jože Podgoršek that may yet dent its ratings in the final days.

At the lower end the polls are no longer as unanimous, with both the Alenka Bratušek Party (SAB) and Marjan Šarec List (LMŠ) on the verge of the 4% threshold and the anti-vaccination party Resni.ca well within range of parliamentary seats.

Given that Slovenia has a proportional representation system in which between six and eight parties are typically in parliament, the ranking at the tail end will ultimately determine who can build a coalition, President Borut Pahor having made it clear that he will give the mandate to whoever is first to produce 45 signatures.

The campaign, a grassroots-heavy effort combined with social media ads, but conducted mostly via dozens of TV and online debates, was initially overshadowed by the war in Ukraine but quickly turned to the government’s track record during the two years of the Covid pandemic before becoming focused on the front-runners once both finally faced off more than halfway into the campaign.

Janša and his junior coalition partners highlighted the government’s economic achievements, in particular low employment and high economic growth, as evidence they deserve a new term, but this opened them to criticism about profligacy that the opposition said set up Slovenia for hard times now that the energy crisis has hit.

The opposition also challenged the government’s management of the pandemic, in particular the heavy-handed approach to restrictions and curtailing of the right to assembly, brandishing it as evidence of the government’s authoritarian bent and warning Janša wanted to reshape Slovenia in Hungary’s mould.

Golob, meanwhile, has run on his track record as businessman, having for years led a fast-growing electricity distributor that he took from a startup to a multi-billion euro company and which he has highlighted as a model for managing the country.

But critics singled out his high pay, roughly half a million euro gross in 2020, and his reluctance to disclose his tax returns. Some right-wing parties also implied he made his hands dirty when it was revealed he had a bank account in Romania that he said was opened by somebody else in his name as a result of identity theft.

Overall, the campaign and the coming vote is reminiscent of polls in 2011 and 2014, when new parties were formed just months before the election and managed to trump Janša, for decades the most dominant figure in Slovenian politics, to later fragment or disintegrate.

A similar bid by Marjan Šarec in 2018 fell flat, but he nevertheless came in second and managed to form a government by harnessing anti-Janša sentiment, which broke apart two years later and gave Janša another shot at becoming prime minister just as the pandemic started to surge.

One major issue in this campaign has been the work of the National Electoral Commission, which botched the mailing of ballots abroad, for which its director Dušan Vučko has blamed a negligent employee and slow postal company. As of yesterday, many Slovenians residing abroad had not yet received their ballots, making it highly unlikely that they can be mailed back in time.

NGOs have loudly protested this disenfranchisement of voters, and Janša himself implied that this could be an issue when he said at the party’s last convention before the election this week that the SDS would fight for every voter and every vote, right until they have all been counted and verified.

Almost 1.7 million eligible voters will pick among almost 1,500 candidates for the 90 seats in the National Assembly. Given the record 8% turnout in the early election, analysts expect that turnout will be higher than in previous elections, when it barely exceeded 52%.