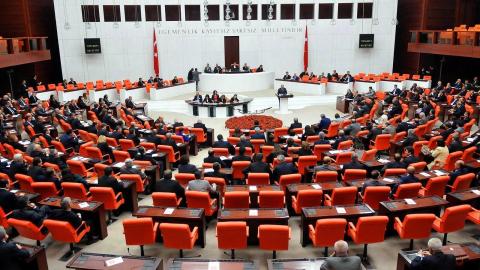 A proposal by Peoples' Democratic Party (HDP) deputy Garo Paylan for recognition of the "Armenian Genocide" sparked debate among the political parties of Turkey.

Paylan submitted the bill "Recognition of the Armenian Genocide, Removal of the Names of Genocide Perpetrators from the Public Domain" to the parliament speaker's office on April 22. Parliament speaker Mustafa Şentop returned Paylan's bill on the grounds that it was contrary to the provisions of the rules of procedure.

Making a statement regarding the bill, Paylan said, "The only society that can heal the wounds of the Armenian people is the Turkish society, and the only parliament is the Turkish parliament.

"This is an immoral offer," ruling Justice and Development Party (AKP) spokesperson Ömer Çelik said, referring to the proposal.

His party rejects and strongly condemns the proposal which is "based on unfounded" allegations about the events that took place in the Ottoman Empire in 1915, Çelik tweeted.

"It is political immorality" for someone who is a member of the parliament, he said. "This proposal is also a sabotage attempt towards the normalization process that started between Turkey and Armenia, supported by Azerbaijan."

İYİ (Good) Party leader Akşener also condemned Paylan's move. "I strongly condemn the impudency that tries to make our nation bow down with the so-called 'genocide' proposal," she said and emphasized that they have a history "to be proud of."

Bulgaria: What is the Price of Natural Gas for June

Natural Gas in Bulgaria will be Cheaper this Month

Azerbaijani Foreign Minister: We will Supply Gas to Bulgaria for 25 years

Erdogan is not optimistic: An important conversation scheduled for today