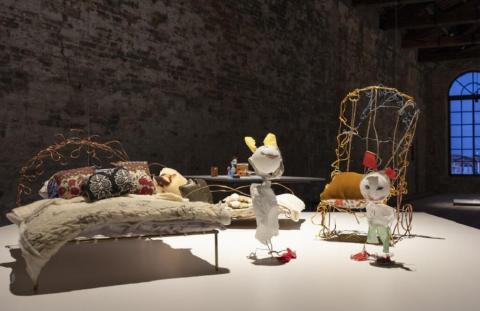 For the first time in the 127-year history of the Venice Biennale, the world's oldest and most important contemporary art fair features a majority of female and gender non-conforming artists, under the curatorial direction of Cecilia Alemani.

The result is a Biennale that puts the spotlight on artists who have been long overlooked despite prolific careers, while also investigating themes including gender norms, colonialism and climate change.

Alemani's main show, titled "The Milk of Dreams," alongside 80 national pavilions opened on April 23 after a one-year pandemic delay. The art fair runs through Nov. 27. It is only the fourth of the Biennale's 59 editions under female curation.

The predominance of women among the more than 200 artists that Alemani chose for the main show "was not a choice, but a process," Alemani, a New York-based Italian curator, said this week.

"I think some of the best artists today are women artists," she told The Associated Press. "But also, let's not forget, that in the long history of the Venice Biennale, the preponderance of male artists in previous editions has been astonishing."

"Unfortunately, we still have not solved many issues that pertain to gender," Alemani said.

Conceived during the coronavirus pandemic and opening as war rages in Europe, Alemani acknowledged that art in such times may seem "superficial." But she also asserted the Biennale's role over the decades as a "sort of seismographer of history ... to absorb and record also the traumas and the...