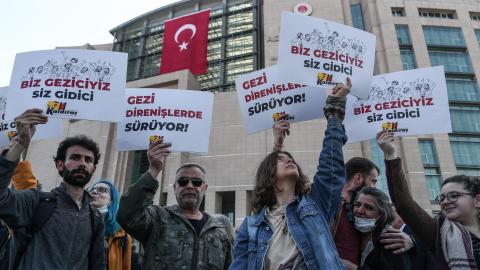 Kemal Kilicdaroglu, the leader of Turkey's main opposition Republican People's Party, CHP said that no justice should be expected from the courts while they are under the influence of Turkish President Recep Tayyip Erdogan.

He described the Gezi Park protests, the first nationwide protests against Erdogan's government as "the voice of the youth shouting freedom".

Kilicdaroglu's condemnation of Monday's verdict was echoed by other Turkish opposition parties.

"The Gezi trial, the Kobani trial [of politicians from the pro-Kurdish HDP party], the HDP closure trial, the trials [that aim to] hinder democratic political activities are an unlawful system created by the government, which is trying to survive with the judicial power under its command," Pervin Buldan, co-chair of he HDP said in parliament speech on Tuesday.

As well as jailing Kavala for life, the court also sentenced Mucella Yapici, Cigdem Mater, Hakan Altınay, Mine Ozerden, Can Atalay, Tayfun Kahraman and Yigit Ali Ekmekci to 18 years in prison for aiding the alleged attempt to overthrow the government.

However, the court said it decided to acquit Kavala of an espionage charge due to a lack of evidence.

"The Turkish court's life sentence for Osman Kavala together with heavy prison sentences for other defendants show maximum harshness. They ignore the decision of the European Court...