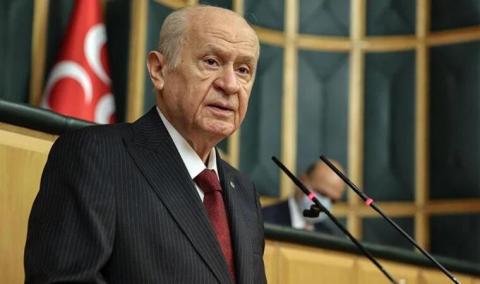 Nationalist Movement Party (MHP) chair Devlet Bahçeli has criticized Garo Paylan, a lawmaker from the ranks of the Peoples' Democratic Party (HDP), for submitting a bill to the Turkish parliament for the recognition of the 1915 events as genocide.

"Unfortunately, there is an agent of the [Armenian] diaspora under the roof of the Turkish parliament. Proposing a bill over Armenian genocide claims is an insult to our ancestors and treason," Bahçeli told his lawmakers at a weekly address on April 26.

Bahçeli's reaction came after Paylan submitted a bill on the recognition of the Armenian genocide to the parliament speaker's office on April 22. Parliament Speaker Mustafa Şentop returned Paylan's bill on the grounds that it was contrary to the provisions of the rules of procedure.

"The fact that such a disgraced, instigator person is a member of the Turkish parliament is a shame for all of us. It's crystal clear by whom this rotten lawmaker is encouraged and with whom he is in solidarity," Bahçeli stated.

The Turkish parliament is not a place for those who think Turkey should recognize the Armenian genocide, the MHP leader said while also criticizing the main opposition Republican People's Party (CHP) for not strongly condemning the HDP lawmaker.

Bahçeli also slammed U.S. President Joe Biden for describing the events of 1915 as genocide for the second time since he came to power in 2021. "This is null and void, unlawful and deserves to be condemned. It's a disaster for politicians to distort the history and put themselves into the position of judges," he said.

He recalled that the Ottoman Empire had to impose forced migration of Ottoman Armenians in 2015 after scores of Armenian gangs supported by foreign forces started to storm...