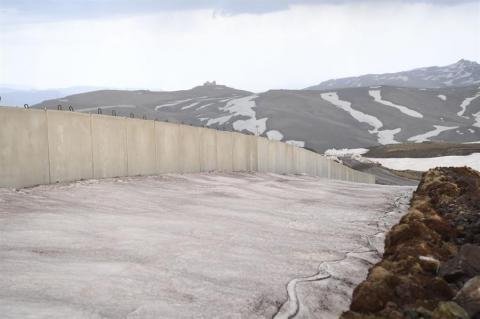 The construction of the 295-kilometers wall along the border of Turkey and Iran will be finished by 2023, the country's interior minister has said.

After inspecting the borderline from a helicopter, Soylu spoke at a press conference held at one of the border posts on April 24.

"Until now, a 191-kilometer wall has been erected along the borders of the eastern provinces of Ağrı and Iğdır," Soylu said. "Also, some 26 minefields have been cleaned in three stages."

Reminding that some 95 percent of the construction of some 250 towers with optical viewfinders has also been finished, Soylu said: "All the eastern border will be controlled with walls, towers, wire fences and thermal cameras at the Turkish Republic's 100th anniversary next year."

Turkey has also built an 837-kilometer wall on the Syrian border in the country's south, the minister highlighted.

Breaking new ground, Turkey had started guarding the country's biggest lake, Lake Van, with the Coast Guard last year against the migrant influx.
"This is the first time that Coast Guard serves in a lake or region in the east," Soylu underlined. "The Coast Guard has a lot of experience in the Mediterranean and the Aegean Seas on preventing migrants [from entering]. We want to take benefits from these experiences," he added.