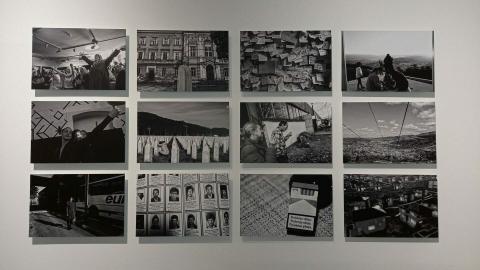 Award-winning Anglo-American photographer Gary Knight told BIRN that the idea for the project, which also includes a book and a series of short films, came to him in 2003 on his return from Iraq, where he had been photographing the US invasion and wondering when the conditions for peace would be met in the Middle Eastern country.

Knight is the executive director of the VII Foundation, the organisation behind the 'Imagine: Reflections on Peace' project, which includes photographic essays, images and stories from conflict-hit countries like Bosnia and Herzegovina, Cambodia, Colombia, Lebanon, Northern Ireland and Rwanda, as well as pictures from the ongoing war in Ukraine.

"With this project we can investigate what went wrong in certain places and what was good and why, in order to possibly apply what we have learned in countries like Afghanistan, Syria, Iraq and hopefully also Ukraine," he said.

He explained that although it's always good to end a war, problems persist after the signing of a ceasefire agreement, which does not always provide the conditions for a sustainable peace.

Knight said he believes that "a process of reconciliation hasn't really taken place" in Bosnia and Herzegovina, and that the country could learn from Rwanda, where more women have been involved in the political process, offering more chance of a successful peace.

"People must be able to reconcile, they must live with each other, grow and build a new society together, but that has actually not happened here. What Bosnia could learn from Rwanda is the implementation of its ceasefire and its truth and reconciliation process, as well as the involvement of more women in political and economic life," he said.