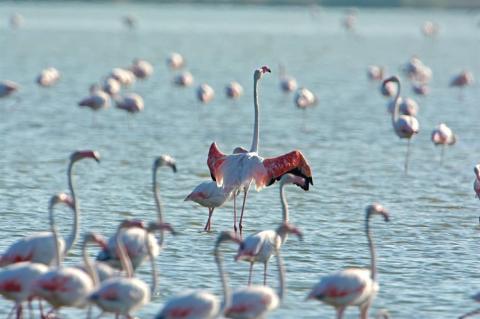 The Gediz Delta, located in the western province of İzmir's Çiğli district, has been added to the "Birding Places" list, an EU platform displaying all the bird watching regions across the world.

"With this platform, millions will be aware of Gediz Delta and Çiğli," Utku Gümrükçü, the mayor of the district, told Demirören News Agency.

Home to more than 250 bird species, the delta hosts approximately 80,000 birds in winter. The delta has been a Ramsar site since 1998 and an Important Bird and Biodiversity Area (IBA) since 2000.

As part of promotion projects, the district applied to "Birding Places" on March 14. After considering the application, the platform recently accepted to add Gediz Delta to its database.

"The Delta of Gediz is a big opportunity for the city's economy. Due to the platform, tourists will come and stay in Çiğli," the mayor expressed.

One other target of locals for Gediz Delta is to "see it on the UNESCO World Cultural and Natural Heritage list."

"The İzmir Metropolitan Municipality has already started a project called 'Let the Gediz Delta Be A World Natural Heritage.' We support it," he said. "As the municipality of Çiğli, we will do whatever we can to put it on the list."

Bird watching or birding is observing birds using the naked eye or a visual enhancement device, such as a binocular or a telescope, or listening for bird sounds and watching public webcams.

"Birding Places" is an EU-based platform dedicated to bird watching, fathering birdwatchers, scientists and environmentalists together. The site informs relaters about the flora, weather and hints about the birding places.