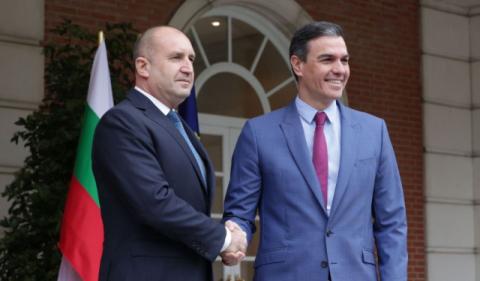 "It is cynical in the most energy-poor country in the EU, with the poorest people to say 'we will find another solution, we will pay more.' Some people may pay more, but others are on the edge and cannot pay more. Those who can afford to pay more and make decisions need to think about those who can't afford it. "

This was stated by President Rumen Radev during his visit to Spain. With these words, he again criticized the government of Kiril Petkov - this time because he decided to look for alternatives to the suspended Russian gas.

Yesterday, Prime Minister Kiril Petkov, Deputy Prime Minister Asen Vassilev and Energy Minister Alexander Nikolov said several times that they would not be blackmailed, which they said was the suspension of Russian gas supplies due to Bulgaria's refusal to pay in rubles. The three are adamant that the request violates the agreement and that they will look for alternatives to Russian gas, which, however, could increase the price for end users. At the same time, the energy minister said that a project for a pan-European gas purchase was being prepared, which would be several times cheaper than Russia's due to economies of scale.

Radev did not say categorically whether he would lose his trust in the government if parliament decided to send military aid to Ukraine. He would wait for the debate in plenary. At this stage, the president would not convene the National Security Advisory Council (NSAC) because "there are too many topics".

Asked if the government was dealing with the crises, he said: "This will be shown by the people I see more and more on the streets. We need to think more about the Bulgarians who are in the most difficult situation in these crises."

Bulgaria: 50.5% of People Disapprove of the Overthrow of Petkov’s Cabinet

Bulgaria: First Day of the Presidential Consultations to Form a New Government (UPDATED)

Bulgarian Doctor Kunchev: In 2-3 weeks We Expect a Peak of a New COVID-19 Wave

Bulgarian Ambassador to the US: Assembly of the First F-16 Fighter for Bulgaria will Begin Soon