Week in Review: Into the Future, Back to the Past 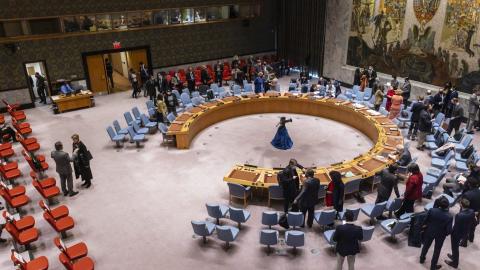 A change, of sorts, may be afoot at the UN. There is growing steam building behind attempts to challenge the veto powers of the UN Security Council's five permanent member states. Specifically, some member states are pushing for vetoed Security Council resolutions to be tabled before the General Assembly.

The General Assembly will, of course, not be able to overturn vetoes. Yet such a procedure could make the five permanent member states think twice about actually exercising their veto. We take a look at what the changes could bring, particularly in the context of UN Security Council Resolution 1244 regarding Kosovo.

Aside from regular visits by Turkish President Recep Tayyip Erdogan, Sarajevo recently saw the visit of the opposition mayor of Istanbul, Ekrem Imamoglu, from the Republican People's Party. On his previous visit to the Bosnian capital, Imamoglu was shunned by local officials, fearful of angering Erdogan. This time, he was hosted by Sarajevo Mayor Benjamina Karic.

In his interview for BIRN, Imamoglu reflected on Turkish domestic politics. The opposition mayor vowed that Erdogan would be defeated in the 2023 Presidential elections in the same way that his party was defeated in the Istanbul city elections.