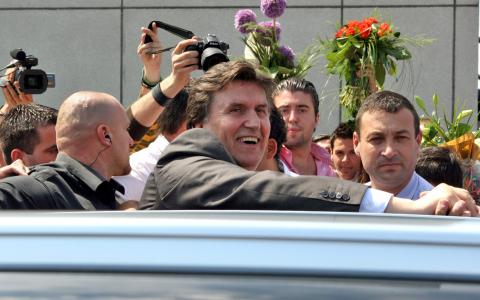 The Bosnian state prosecution filed an indictment this week charging ten people with committing a war crime in Sarajevo on May 3, 1992, when a Yugoslav People's Army military convoy was withdrawing from the capital.

In the 'Dobrovoljacka' case, so called because of the street on which the crime was committed, the prosecution has indicted several people who were senior officials of the Republic of Bosnia and Herzegovina at the time, including Ejup Ganic, who was a member of Bosnia's presidency at the time, Hasan Efendic, who led the Territorial Defence force, Bosnian Army generals Hamid Bahto and Fikret Muslimovic, and Bakir Alipasic, who was chief of police in Sarajevo.

The other indictees are Zaim Backovic, Jusuf Pusina, Enes Bezdrob, Ismet Dahic and Mahir Zisko. The prosecution hasn't yet specified which crimes each of them has been charged with.

It did say however that evidence has been collected about the deaths of eight people, including civilians and medical staff, the wounding of 24 individuals and the capture of several dozen soldiers and civilians who were tortured and abused.

The indictment was filed following an investigation which went on for over a decade. The probe, which was halted at one point and then resumed after a legal challenge, also saw the controversial detention and then release of two Bosnian officials in Vienna and London on a request from Serbia.

Only after the charges have been confirmed by the state court will the details of this high-profile indictment be publicly disclosed. But several key points are already known.

Courts in Britain and Austria already ruled on the case