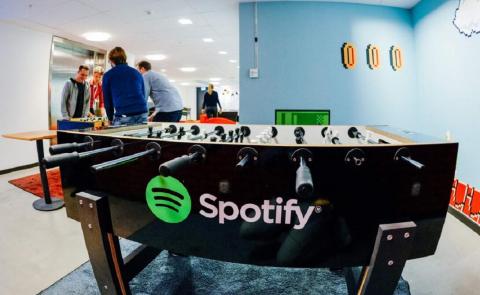 Music streaming giant Spotify on April 27 reported a lower than expected growth in paying subscribers in the first quarter, citing its exit from Russia.

Following the company's publication of its first quarter earnings, shares in the streaming service were down over 11 percent on the New York stock-exchange, where the company is listed.

Spotify reported that at the end of March it had 182 million paying subscribers, a 15-percent increase compared to a year earlier, but short of its estimated 183 million.

Meanwhile analysts had projected the number to hit 187 million.

"While this is slightly below our guidance, after excluding the involuntary churn of approximately 1.5 million subscribers as a result of our exit from Russia, growth was above expectations and aided by outperformance in Latin America and Europe," the group said in a statement.

Like many Western companies, Spotify suspended operations in Russia after Moscow's invasion of Ukraine, a withdrawal that was finalized on April 11.

By the end of next quarter, the company, which was founded in Sweden, hopes to have 187 million paying users while anticipating a loss of another 600,000 subscribers in Russia.

On the other hand, Spotify did not specify any financial impact resulting from a controversy involving the popular podcast of stand-up comedian and sports commentator Joe Rogan.

Rogan, was accused of spreading misinformation about COVID-19 and discouraging COVID-19 vaccinations for young people, sparking artists, including Neil Young and Joni Mitchell, to call for boycotts against the service.

The total number of monthly users, free and paying, of the platform came in at 422 million in the first quarter, above the group's expectations and in line...

Biden thanks Erdoğan, US signals support for Turkish F-16s