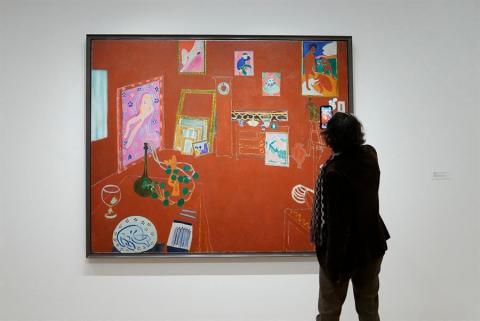 When Henri Matisse painted "The Red Studio" in 1911 he portrayed 11 of his artworks on a single canvas. An exhibition in New York is about to display all the surviving works together for the first time.

In "The Red Studio," the French artist reproduced almost a dozen miniature versions of his paintings and sculptures as a way to depict his workshop in the Paris suburbs, not to mention play with perspective, color, time and space.

All the pieces seen in the painting have survived apart from one that Matisse, considered among the greatest artists of the 20th century, had asked to be destroyed after his death in 1954 at age 84.

The Museum of Modern Art has tracked down the surviving 10 works and will put them on show alongside "The Red Studio" at an exhibition that opens next week.

"We did the treasure hunt of finding these things all over the world," the curator, Ann Temkin, told AFP during a preview.
"Now you can do the treasure hunt of, 'Oh this one's over there and he has eyes in the real painting but no eyes in 'The Red Studio,'" she added.

It includes six paintings, two sculptures, a terracotta piece and a ceramic dish. They were made between 1898, when Matisse was 28, and 1911.

"Some of the paintings were very recent, that he had just made a month or two before he made 'The Red Studio,'" said Temkin.

"We had the idea four years ago [of] why don't we see if we can find the real life equivalent of each of the pictures or sculptures that are represented in this painting in an abbreviated way and have a reunion," she added.

MoMA already had two of the works and the main piece. It gleaned three from the National Gallery of Denmark in Copenhagen...

Bulgaria: Demanding a Referendum on the Euro is Unconstitutional