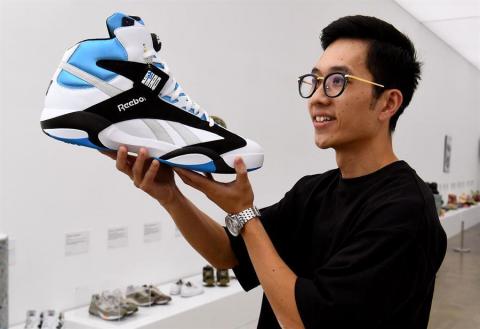 The "Mona Lisa of sneakers" went on display in Melbourne on Friday, with Michael Jordan's old high-tops and around 100 other rare shoes offering a glimpse into a lucrative market driven by die-hard "sneakerheads" and eager investors.

Online auction giant eBay opened the three-day Museum of Authentics in an apparent bid for a bigger slice of the sneaker resales market, which has boomed during the pandemic.
"We're essentially showcasing and displaying some of the rarest, most iconic sneakers in the world," eBay sneaker expert Alaister Low told AFP ahead of the opening in the city's trendy suburb Brunswick.

The signed Air Jordans, dubbed the "Mona Lisa of sneakers" by Low, were worn by Jordan on-court in 1985 and a similar pair sold at auction in 2020 for $560,000 (532,000 euros), the most expensive shoes ever put under the hammer at the time.
Alongside the Chicago Bull's footwear are College Dropout Bapestas, Kanye West's earliest sneaker collaboration.
West's touch rivals Jordan's, with a pair of Nike Air Yeezys worn by the rapper fetching 1.8 million dollars last year.
For the owner of the Air Jordans on display, building a collection is about more than money.

"Actually, it's all about, like the passion. Yeah, I just love sneakers because I never resell them," Michael Fan, who lent out a small selection of his collection of 700 shoes to the exhibition, said.
Fan, who said his array of shoes fills a carefully organized basement in his Melbourne home, said approaching the sneakers as a purely financial investment was a gamble.
"If you put the investment, like as a first priority, there will be like high risk."
The market for rare shoes was "going up crazily," he added, with values of some in his collection jumping...