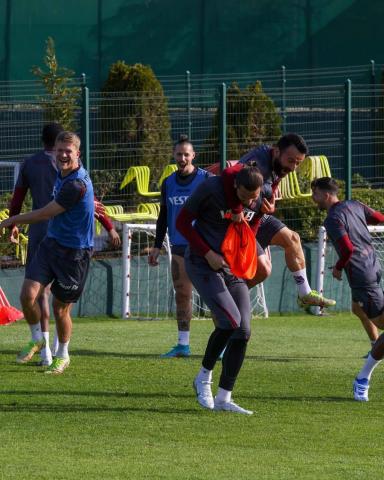 The Black Sea province of Trabzon is ready for joyous celebrations this weekend as the city's beloved football team, Trabzonspor, counts down the hours to claim its first Turkish league title in almost four decades.

A draw will be enough for the Süper Lig leader on April 30 against Antalyaspor to claim the league trophy with three weeks still to go.

Trabzonspor, who has totally dominated the season, is 11 points ahead of second-placed Fenerbahçe after 34 weeks, and the celebrations could start early if the Istanbul clubs drop points at home against Gaziantep in its home game late on April 29.

Tens of thousands of fans flocked to Trabzon for the game and celebrations from all across the country and even from different parts of the world.

The demand to reach the city and celebrate the upcoming championship is so huge that airline companies had to increase the number of daily flights to the city from 15 to some 45 with additional trips.
However, there was some bad news for the travelers on April 29, as some flights to Trabzon were delayed and canceled due to heavy fog.

"Many fans, who could not find flight tickets directly to Trabzon, flew to the nearest airports in [the Black Sea provinces of] Giresun, Samsun and [the eastern province of] Erzurum to reach the city via a land route," Demirören
Trabzonspor was the first club to break the three big Istanbul clubs' monopoly in winning Turkish league titles when it claimed the trophy in the 1975-76 season.

It dominated the league from there and won five consecutive league titles, including the 1980-81 season, and added another in the 1983-84 season, earning the nickname "The Black Sea Storm.

The club has come close to winning the league again on several occasions...