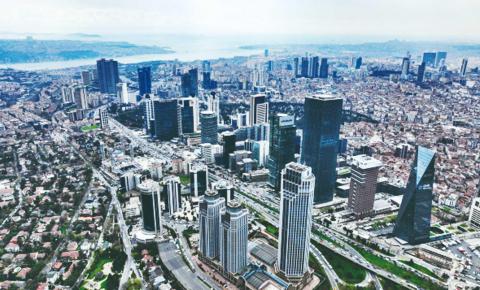 With its large metropolises growing at high rates, both horizontally and vertically, Turkey has become the champion of skyscrapers in the European region, according to a prominent non-profit data provider.

There are 67 skyscrapers in Turkey, and 48 of them are located in Istanbul, a metropolis with a population of over 16 million, the latest figures from the Council on Tall Buildings and Urban Habitat (CTBUH) show.

Eight more skyscrapers, including the Central Bank building in the Istanbul Finance Center, are under construction in the country.

A skyscraper is defined as a continuously habitable high-rise building that has over 40 floors and is taller than approximately 150 meters.

Russia follows Turkey in the region, with 51 skyscrapers, and the United Kingdom ranks third, with 33 office towers.

The number of high-rise buildings in Germany, Spain and Poland is 20, 13 and 12, respectively.

In both the Netherlands and Italy, six buildings of that kind have been constructed so far.

The rest two skyscrapers in the European region are located in Switzerland and Sweden.

In the category of European cities, Moscow and London chase Istanbul with 46 and 30 skyscrapers, respectively.

The Turkish capital Ankara (11) and the Aegean province of İzmir (six) took place in the top 10 on the European cities' skyscrapers list.

Hong Kong, a special administrative region of China, is by far the champion of the world cities, with 518 high-rise buildings taller than 150 meters. There are only two cities from Turkey on the top-100 list: Istanbul (31st) and Ankara (98th).

Globally, Turkey takes the 14th place in the list of countries with the highest number of skyscrapers behind China (2,719), the United States ...

Ukraine is officially becoming more powerful. Everything is confirmed

Conflict within NATO. There's growing fear, it's speeding up, it could get nasty?

Day 334 of the Invasion of Ukraine: Germany will Not Stop Poland from Sending Leopard Tanks

"We won't stand in the way of Poland"

Production of drugs with high demand to be increased: Minister