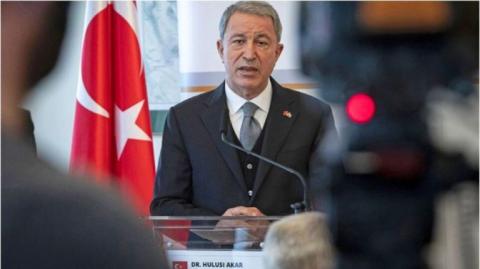 Straight on the heels of the recent barrage of Turkish violations of Greek airspace, with flights over large, inhabited Aegean islands such as Rhodes and Kalymnos and the Imia rock islets (that led the two countries to the brink of war in 1996), and two strongly-worded Greek foreign ministry demarches to Ankara's ambassador to Athens, Turkish Defence Minister Hulusi Akar unleashed yet another attack against Greece, accusing Athens of "provocations".

Akar accused Greece of engaging in provocative actions and rhetoric in the Aegean and the Mediterranean, and declared that the Turkish Navy is on alert.

"Greece, with provocations and actions during military exercises is attempting to establish a de facto situation. We shall not allow it," Akar said.

"We will definitely demonstrate our reaction to any action taken against us," he added.

"Our Air Force has exhibited the necessary reaction to their [Athens'] violations. Our Navy is already on alert. It is doing whatever is necessary to protect our maritime jurisdictions," the Turkish defence minister said.

Despite the recent, intense escalation of Turkish violations of Greek national airspace, which also endanger civil aviation and about which Greece has briefed the EU and UN Security Council member-states, Akar said that Ankara supports a bilateral dialogue, which for Turkey includes a long list of demands entirely unacceptable for Athens, including the removal of military defences from Greece's Aegean islands.

"For us, it is not a sign of weakness when we say, 'Let us solve our problems through dialogue.'"

Following last week's massive airspace violations, the Greek government decided to suspend bilateral talks on confidence-building measures, which had been decided during...