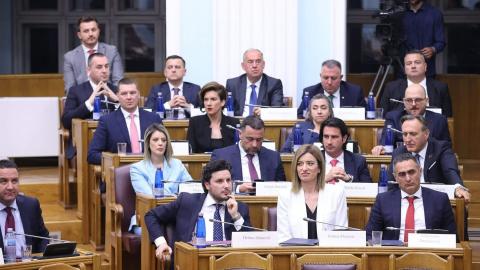 The leader of the Black-on-White bloc, Abazovic, was elected Prime Minister by 45 votes in the 81-seat chamber, supported by his own coalition, the pro-Serbian Socialist People's Party and the former opposition Democratic Party of Socialists, DPS, the Social Democratic Party, the Bosniak Party and two ethnic Albanian coalitions.

The opposition Social Democrats voted against electing the government, while the two largest opposition blocs, For the Future of Montenegro and Peace is Our Nation, which dominated the last government, boycotted the vote.

They accused Abazovic of betraying the outcome of the historic 2020 elections that ended decades of DPS rule.

The former government was formed on December 2020, after three opposition blocs in the August 2020 parliamentary elections ousted the ruling DPS, which had held power for decades.

Soon after his cabinet was voted into power, Abazovic said the new government's key goal was appointing a new Supreme State Prosecutor and Constitutional Court members, as was stated in the political agreement on forming the minority government.

Abazovic pledged to promote dialogue between all parliamentary parties to unblock the logjam in the Montenegrin judiciary.

"I will open a dialogue on electing a new Supreme State Prosecutor and Constitutional Court members. Judicial reforms will enable political stability in the country and speed up negotiations...